This is our Family Website, I am a British Citizen and my wife Svitlana is from Ukraine.  We live in England.  I am a retired Police Officer and since my retirement I have taught myself how to use computers, I also ran several Broadband Campaigns to persuade BT to bring Broadband technology to rural areas.  This led to me being invited to the BT Tower and to me winning an Award. 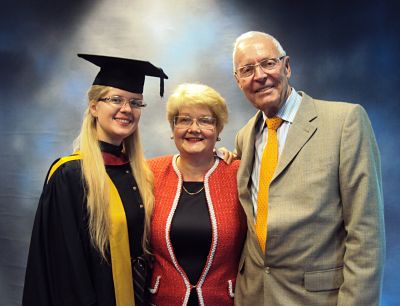 The photo shows Svitlana and me together with Kate who has just Graduated from Newcastle Business School. The Photo Links Page gives an opportunity to see the interesting places we have visited and the great friends we have made.
Like I said in my welcome, we live just south of Bristol in the South West of England.  The area is very pleasant, and the beautiful Georgian City of Bath, with it's ancient Roman Baths and fine architecture is close by and it is not too far to Stonenge.  The seaside resort of Weston super Mare, with it's new long promenade, new Pier and usual seaside attractions is still very popular with tourists. Bristol of course is also well worth a visit, with the magnificent Brunel built Clifton Suspension Bridge and of course the first iron ship the Great Britain.  The Bristol Zoo and Clifton downs are also worth a mention as somewhere to spend a very pleasant day.
I am very pleased that the British people voted to leave the EU when they voted in the Referendum in June 2016.  The trouble is that the then Prime Minister, Teresa May, waited almost a year before issuing article 50, the official notice to leave the EU, she also had to contend with lots of obsticles placed in her way by some MPs and past MPs who, mainly for their own ends, wish to remain in the EU.
However, hopefully Boris Johnson our new Prime Minister will find the strength and the support to complete the negotiation with the EU as soon as possible.  We buy more from the EU than they buy from us, so it is in their interest as much as ours that an amicable settlement is reached and that they do not try to hold the UK to ransom as a deterent to other countries who may wish to leave the block in the future.   However the Labour Party together with the small minority parties in Parliament plus turncoats in the conservative party who backed leaving the EU but have now changed their minds are doing all they can to remain in the EU and are using the Speaker of the House as their puppet in thwarting the elected government.


Pleased to say that now Boris Johnson the UK Prime Minister has a Conservative majority in Parliament it is likely that the UK will leave the EU at 11.00pm on the 31st of January 2020.  We have left the EU but are keeping to their rules until; 31 Jan 2021